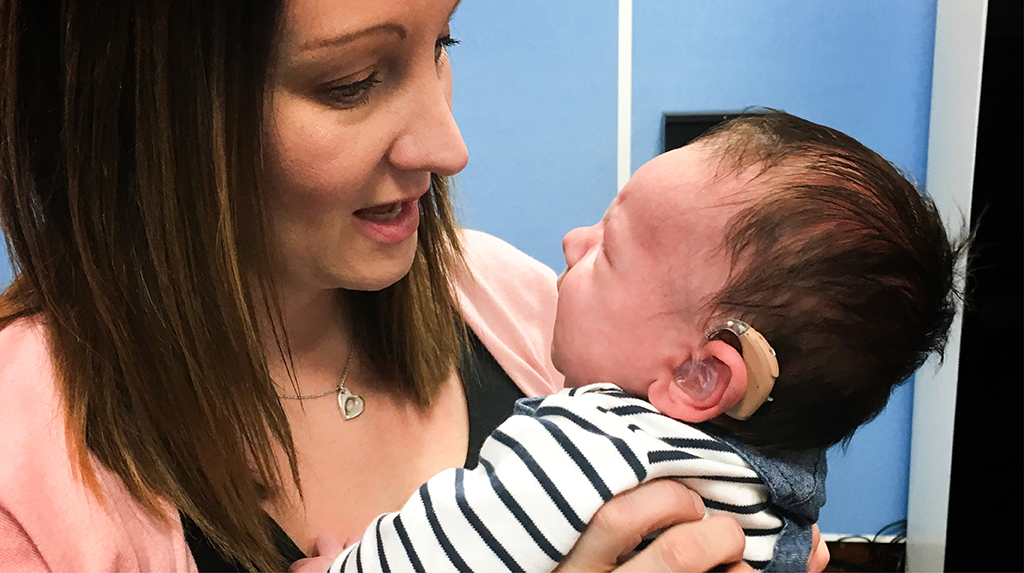 So F is now two months old and has been aided since he was six weeks. As expected we have seen no definite response to sound, yet we continue to wear them, as instructed, to stimulate the hearing nerve.

He isn’t a fan of his new ears and each morning brings tears (often from us both) as I wrestle with him to get them into his tiny ears.

It seems so long ago that B was here – I’d forgotten how much I hated the hearing aid stage of his journey.

Hearing Aids…
They aren’t the most fashionable baby accessory and the logistics of getting a 9 week old to wear them can seem impossible at times.

Don’t get me wrong, I am grateful that we have this technology and that F is being supported medically from such an early age. However the constant buzzing, and whistling, you get from a newborn wearing hearing aids is pretty horrific.

(For those of you less familiar with hearing aids – you basically get feedback from the microphones every single time they touch something, whether that be their parents arm, their own hair or the crib that they lie in.)

I often feel like I am going to go insane from the constant high pitched noise that lingers in my head from the hours of feeding and holding F.

The reality is that hearing aids and babies aren’t the most compatible of things and no amount of wig tape can truly keep them in place enough to avoid the dreaded whistle.

It would be easier to tolerate if we were seeing responses from wearing them but, as we know from B, this is just a stepping stone in his hearing journey.

The past month has been a blur of appointments and tests.
Our little bubble of ‘Christmas with a Newborn’ has been well and truly burst.
We have been thrown back into a world of hospitals, assessments and anxiety.

Cytomegalovirus (CMV) has been ruled out and the Auditory Brainstem Response (ABR) test has confirmed a bilateral sensorineural loss of severe to profound.

He has had two visits from his Teacher of the Deaf (TOD) who will now be part of his hearing journey.

We have already embarked on our dreaded fortnightly audiology appointment – in which I have to hold (a screaming) F’s head so that the audiologist can make impressions of his ears to create new molds. Babies grow so quickly that this is a necessity, however it isn’t quite the regular baby group I dreamt of whilst pregnant.

Yesterday was the toughest so far…
It brought the one test that I had been dreading.
The MRI Scan (Magnetic Resonance Imaging).

It doesn’t matter how prepared you think you are, or whether you’ve already done it before, putting your baby (of whatever age) into that gigantic, noisy, machine is traumatic.

We were advised to arrive with a hungry and tired F so that he could be wrapped and fed ready for the scan… easy right?

In reality, after an hours car journey in rush hour traffic to the centre of Newcastle, which F inevitably slept through, he arrived at the hospital wide awake and fascinated by the bright ceiling lights.

Needless to say he wasn’t going to go down without a fight.

Eventually we were taken to the Scanning room…..we were given the brief then left on our own in the bright clinical surroundings to get a now very alert F to sleep.

After 40 minutes of cuddling, swaddling and feeding I finally won that battle!

Then came the tough part – laying my 9 week old down on the trolley and watching as they placed the protector over his tiny head. He was then moved into the machine and we were left alone with our ear defenders to wait.

We waited and watched our tiny boy in that gigantic machine for what seemed like an eternity.

In actual fact it was more like half an hour but when you’re alone in the room with the excruciatingly noisy machine scanning his tiny head from all angles it feels so much longer.

Eventually it was done.
They couldn’t tell us anything.
The doctors will review the scans and the results will be sent to his ENT consultant within the next two weeks.

Although I’ve been here before, although I know this is merely a stepping stone to F hearing and although I try to stay positive about this journey, yesterday was a day in which I just felt angry.

Angry that my baby has to go through all of these tests.

Angry that the OH and I have to do it all again.

Angry that both my boys are deaf.

Yet, when I looked at my tiny boy lying in his pram – smiling blissfully at those bright, hospital, lights I was reminded of why we were there.

This is all part of F’s hearing journey and one day, I hope, we will look back and realise it has all been worth it.