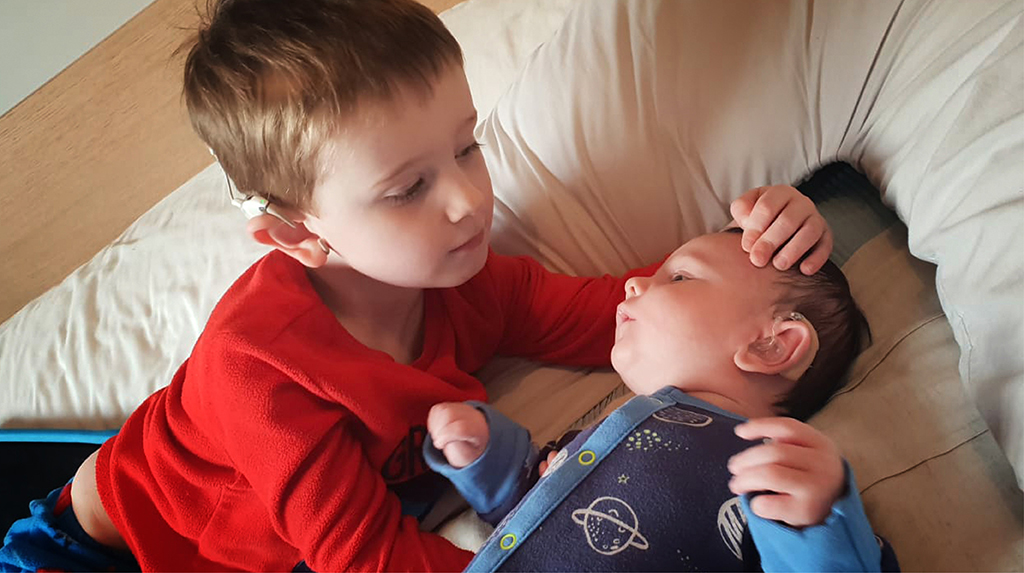 When B first got his cochlear implant processors his (then) TOD warned us not to refer to them as ears. This can confuse a child and cause problems later in school. We tried to stick to this for some months…processors, implants, CI’s etc. We tried using them all but for a newly implanted one year old they were all fairly complex words to understand.

Gradually we reverted back to the term ears or special ears. I don’t think this confuses B and he can certainly point to his real ears when asked to label body parts. He knows and understands that Mammy’s ears are different to his. He knows that I do not have special ears.

When B finds something too noisy he holds his ears just like any other child. He knows he cannot hear when he takes off his processors and for now that is how he understands his deafness. He has not yet questioned why he has his special ears or why his peers do not.

To him his ears are just his ears.
All he has ever known.
They help him to hear just like his friend wears glasses to help him to see.

I love his innocence and the confidence he has about his ears. However I dread the questions that I know will inevitably come one day. I hope he always feels confident about his ears and remains proud of them but I worry endlessly that society will snatch this confidence from my gorgeous boy.

When we told B that his baby brother will also need special ears he was thrilled. We returned from the first ABR tests with F to an extremely excited B wanting to see his brother’s special ears. He was disappointed to hear that it would take some time to get them.

B’s special ears really are just that – they give him a window into the hearing world and allow him to flourish in a hearing family, however he will always have the choice to be a part of the deaf world should he wish to be.

Special Ears has become our family name for the processors and what we tell children who ask about them when we are out and about.

From time to time B will try and attach his ears to my own head – and I will have to remind him that mammy doesn’t have special ears. He will sometimes ask why but for now is happy with the simple response that he got special ears as a baby because his own ears didn’t work very well.

Just last week, as he was sat on the toilet – contemplating life whilst he tried for his third poo of the day (B seems to think he should poo every single time he goes to the loo – which means we spend a fair amount of time putting the world to rights in there) he pointed out that mammy doesn’t have special ears like him. He went on to say ‘but my baby is getting special ears like me’, I replied that he certainly was and that I hoped he would do just as well with hearing as B.

He sat there looking thoughtful for a few minutes.

Then with a cunning smile announced that he had a good idea… F should get purple ears because purple is B’s favourite colour.

He went on to explain that F could give B his new purple ears and F could wear his old white ones.

I tried to explain that they wouldn’t be able to swap their processors…but B being B, simply looked at me and told me; ‘Don’t be silly mammy. F can have my ears, its ok. I can share, remember?’

The innocence of a child’s mind.