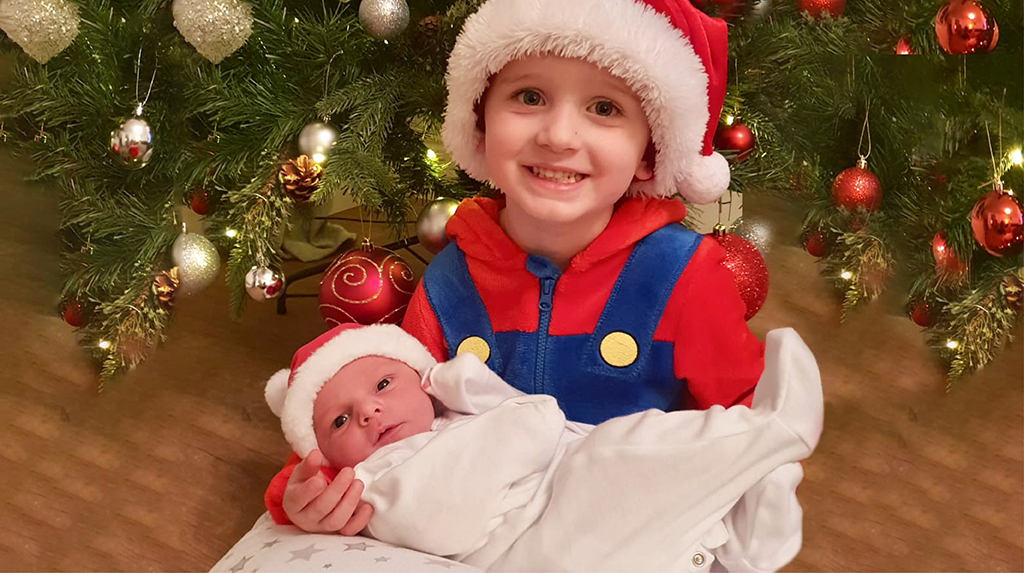 So, we’ve had a pretty stressful first month…

Not only did I give birth to our second child a month before Christmas, I did it the day before the OH’s birthday.

Then, 15 days later, we had found out our perfect little man was deaf, just like his big brother.

We’ve had the usual demand of visitors, all wanting to meet our littlest hearo, yet when you mention he’s deaf the pity, sympathy, and awkwardness returns.

People don’t mean to be rude. It’s just their way.

They don’t realise how perfect their lives are.

Don’t get me wrong, my boys are perfect. B is an absolute superstar and I know F will follow in his big bros footsteps. But the reality is, they cannot hear.

They are deaf.
Deaf in a hearing world.
Life will always be that little bit more challenging for them.

Cochlear Implants are amazing things and have given B the most wonderful chance in life. We are eternally thankful and continuously hopeful for the advances in technology to come. We know F will be just fine.

So, B is amazing. He’s an absolute little pleasure. He really is the light of our lives…

Yet, he is also a little monster.

Now, I’m not talking a cute little Sully here. He is a full on, attention seeking, foot stamping critter with more attitude than Madonna.

In the past few months B has turned into the demon child. He swings from Jekyll to Hyde on an hourly basis. He will lash out and shows little respect for anyone who tries to intervene…

He is a Threenager.

A Threenager; that turbulent stage between toddler and big boy.

He is desperate to be seen as a ‘big boy’ yet craves the attention and mothering of a baby.

He has evolved from being the first grandchild on both sides and being ridiculously spoilt to having to share attention with not only his cousin, but his little brother as well. He is torn between loving his brother and being furious with him for stealing his well-earned lime light.

I love my monster but he has a real talent for turning me into an unhinged, crazy lady – or as he likes to call me; Bossy Boots.

He has been amazing in helping with F. He loves playing the doting big brother and laps up the praise and rewards. However, he has begun to take it out on the OH and I. He has an uncanny tendency to make us feel guilty, and often refuses to carry out simple requests – especially during bedtime.

Bedtime – that glorious time of day which we dread and wish for all at once.

Christmas has been particularly stressful. We have been fortunate to attend several Christmas events and B has enjoyed each and every one. Yet it is never enough. He always wants more.

We are consciously aware that he may feel threatened by F. We have done everything to include him, to reassure him that he is still, and always will be, loved. Yet it is never enough.

He seems to crave the attention, regardless of whether it is negative or positive.

Christmas was a stressful blur of trying ridiculously hard to stick to timescales, portray a sense of calmness and adhere to the expectations of an excited family.

The day after Boxing day was particularly challenging.

The OH went back to work, family and friends, alike, were having lazy days and I was alone with my boys.

We opted for a pyjama day as the weather was dismal and B was desperate to play with his mountain of Christmas gifts. The first few hours went well. F slept so B, and I, played games. He loved Hungry Hippos and Crocodile Dentist. We played with Paw Patrol, PJ Masks and Batman, as well as doing jigsaws. He was an absolute delight and revelled in helping me with his baby brother.

By the afternoon, he was growing tired and the ‘naughtiness’ crept in…

At one point, as he ran between the hallway and kitchen, repeatedly, at what seemed like 100 miles per hour whilst screaming at the top of his voice as I desperately tried to settle F, who by now just wanted mammy snuggles, I actually thought I might cry.

I attempted to slow him down, to talk to him. Yet in the kerfuffle his left processor came off his ear. He immediately smirked and threw the right one straight at me.

He then proceeded to dance around the kitchen, laughing hysterically as I tried to replace his ‘ears’.

I tried to sign, yet he refused to look at me. Instead he stuck his tongue out and ran off into the other room.

The OH often jokes that he wishes he could take his ears off to avoid my nagging – yet it’s hopeless when your deaf 3 ½ year old actually does it – I mean what am I supposed to do when he would rather be deaf than listen to me; Old Bossy Boots??

I dread to think, what the actual teenage years will be like.

After about 20 minutes I gave up. I took F and sat down on the sofa feeling deflated.

Within minutes B came in holding his ears ‘You fix my ears mammy?’ he said with his heart warming cheeky smile.

As I fixed his ears and he hugged me, I asked him why he had been so naughty… his reply was the same as it always was; ‘That was just a little accident. Sorry mammy’ – his default excuse yet my heart melted. How could I be cross with him when despite all the odds he could communicate and display his cheeky sense of humour so confidently?

So instead, I hugged him a little bit tighter, I told him I loved him and we went on with our day.